Instead of using these nail tip guides in the traditional way, I decided to try something a little different. I applied it on the corner of my nail, up-side-down. If I did not cook, blab on the phone and do a bunch of other stuff I shouldn't have been doing immediately after painting my nails- I may have gotten a clean line with the black, as well as not smudging my manicure. But I feel like I disguised all the boo-boos pretty well.
I started with 2 coats of one of my latest frankens 'Teal #003' a very vibrant color that dries to a satin finish. When it was dry I applied the Nailene French Tip guides up-side-down the the corner of my nail, and used the Black french tip pen to color this area in.. This dried super duper fast because it is a water based nail color (and must have a top coat over it). I then added these cute little roses from the bedazzle # 71042 to the black tip area, and disguised the line where the polish meets up Nailene French Tip Pen with a line of a beautiful glitter; Sally Hansen 'Secrets'. I then covered the 'decorated' area with 2 coats of my cheap Billie Top Coat and let everything dry.
I  had originally intended to use China Glaze "Shower Together" for this mani - but went with the French Tip pen instead. Ideally I should be sitting still while my polish is drying, but I fudged this up by doing a bunch of stuff while it was drying. I do hope to re-create this up-side-down french tip look soon as I think this looks really, really cool.
My ring nail is the only nail with a full nail of top coat, The rest of my nails are just 2 coats of Franken 'Teal #003'. It dries to a satin finish which I like.
- stuff I used -
- The stickers I used - 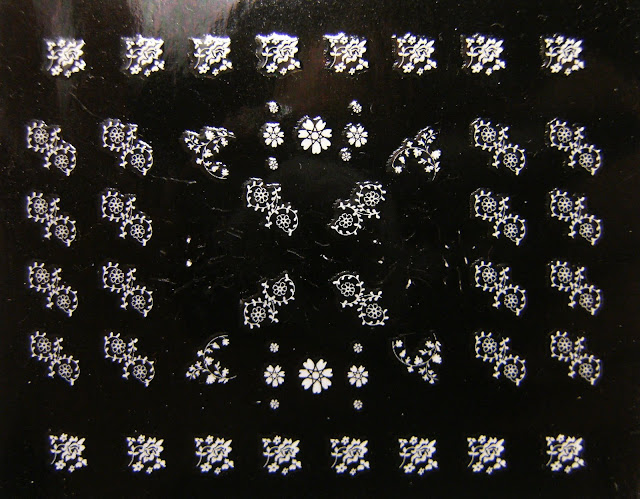 That is so pretty!!!

This is so pretty. I'm going to try this tonight. I love it!!!

awesome! I love that frankened teal!!

I love the side positioned french. The colors work so well together and the decals add a pretty accent. Beautiful! <3

I love this look! Great idea and thanks for sharing it! I might have to give this a try!!!

You are the queen of nails! The MD, the chief exec., the Empress. Wow! A bit OTT for my taste but fab-u-lous!

Wow, this is an awesome mani! I really love it! :) I don't think I could have the patience to do that, I'm waaay to fidgety!

I am glad I found your blog. You have some great manis. This looks great, such pretty colors together.