FACT: Reading Nail Blogs and having a Nail Blog... will make you want to buy more nail polish.... 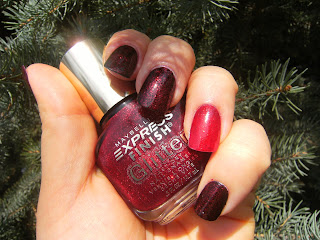 Wow, I was totally gonna buy China Glaze ' Ruby Pumps ' the next time I went to the big city to the nearest Sally Beauty Supply....... but I found this and many other very pretty and fast drying Maybelline polishes.... For 2 bucks!!!!!!!!!!!!!!! Plus a fudge-load of other great nail goodies ( to post soon ). If you Google the CG Ruby Pumps, there are many other polishes just as beautiful, from Essie (disc. ?) and color club. I did not think I would fall for this red glitter, but it is very pretty. The whole time I wore it I was constantly gazing at it.
~♥~
I'm not sure if it against the law, but I took pictures in the store of all the available colors, in case I get a hankering to pick up some more.... I am always delighted to walk into a bargain-type store and find goodies like this... makes my week! Yeah, I did say I was not gonna buy any more nail goodies.... and I totally took it back, then I said I was gonna not buy so many... and on and on.....as you can see from my little list of polishes to wear/swatch, and those I have not worn yet on the right-hand side of my blog, clearly = I can do without buying polish for a while....... But I bought these last week, and I am giving this store 2 more weeks, and if there is still colors available that I want... they are fair game. I was hoping that I would find that beautiful matte olive in this store.. but nope. 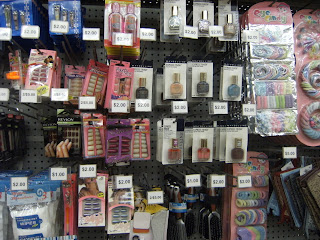 You bet your bunz that I bought all those Party Toez... { well I did leave 2 for someone else to buy } I bought two of the red ones that were only .50 cents! And the Pink Cherry one was $2.00... I have been doing alot of giving and ROAK lately, as I always do, but being more mindful of goodies returning to me.... However everything I do is because I WANT TO, not just because there is a need for it = so when I walked in this store I was super-duper happy! 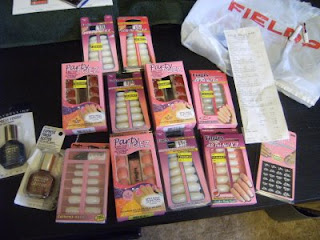 So all those packages with the yellow sticker on them, were half price, those Fing'rs 108 un-painted acrylics, were .50 cents each! Fifty frig-digitty cents!

The two polishes "Red Comet' and 'New Years Blues', the hard case of Fing'rs nails, the Pink Cherry Party Toez, and the White nail stickers, all those goodies were $2.00... It was a nice 'mini' reward form me to find this haul, It is my return of sending out kindness for donating all clothes that I will never fit into, and will never wear again because they are too 'revealing' to the thrift stores in town.... { That was really hard for me }.

~♥~
I was just writing about those Party Toez a few weeks ago..... I did write my letter to Fing'rs and Nailene, and they did respond { about the LETHAL cracking for their pre-painted nails..... maybe I will post that too } I also bought five 108 packs of Fing'rs unpainted acrylic nails..... I scored bid time that day. Also those Revlon's in the photo were really good too, I have used them before and I had no problems. It took all my will power to not buy one of everything in this photo...... but .......
~♥~

Below is a fuzzy pic I has to include, I absolutely love how a fuzzy pic of glitter polish looks... well... fuzzy glitter anything. On all my digits, with the exception of my RING finger, I have used a deep black polish = 1 coat, and then two coats of Maybelline 'Red Comet'.... My RING finger is just 2 coats of ' Red Comet'. Maybelline still makes this same polish, just in the new bottle with the red cap. The one I found may be older, but it did dry to the touch in 1 minute.... which is rad, so far I have only picked up 3 of these, which I am to post eventually, and they are all awesome. All my photos are in the beautiful sunshine and the shade..... It really does make a big difference when taking photographs to get some sun in them. 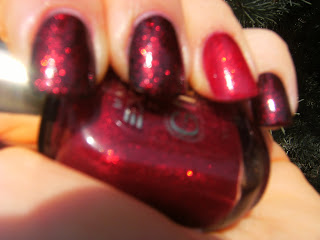 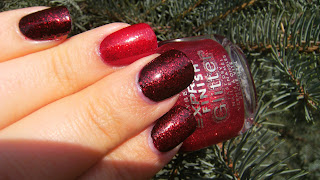 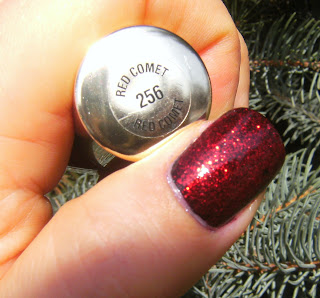 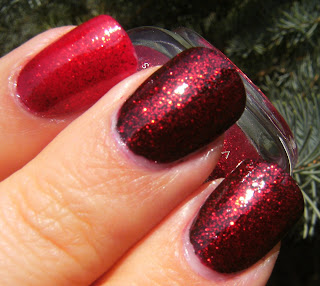 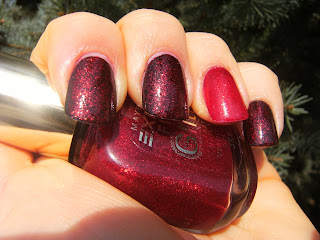 Hey there GF!! Boy you have some great stores around you!

I have Red Comet too, I found a couple at the DT awhile back. I was so thankful that I grabbed some extras because I was able to ROAK one to my dear Nixxy who is allergic to China Glaze Ruby pumps. Red Comet she can wear no problem.

Hope to see some pics of those party toes soon!!

What a cool store you have to shop for polish and nails! I'm loving Red Comet! Awesome color!

I love Red Comet! We're all heading to visit you and check these stores out. I having nothing even remotely like the great stores you do to find nail polish treasures :/

Pretty shade and I like all that shimmer. Nice deals you got there.

gorgeous colour!
I do love my ChG Ruby Pumps though, I always check out my nails when I wear them XD
Great haul!

Hey, just wanted to let u know that you can get those little bottles from Transdesign.com, under bottles, then glass and porcelin bottles tab. hope that helps
stacie

Those reds are awasome and Red Comet seems like a hot one !