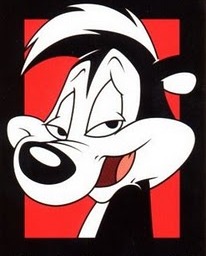 ummm here is a fuzzy photo of Peppy le Peu

EDIT: what are the stinkiest polish you have come across? please comment as there is also a thread on MUA on this....

Here is a fun post about stinky polish's... I will assume they are NOT B3Free, which attributes to their funk! - OR_ they could just be made with smelly-er lesser quality ingredients. None of these have ingredient labels.


The two blues I bought in Toronto Canada..... HA ha-  Just kidding, It's Toronto, ONTARIO Canada....  I hate it when world news says Toronto Canada or Vancouver Canada.... can they not include Toronto then the Provence Ontario; then Canada, or Vancouver, British Columbia and then Canada.... They don't seem to do that with other cities/Provence in the world. I never hear, or read Miami USA Idaho USA I suppose in casual conversation it's fine, but non- Canadian news wise i think it's just lazy journalism..... It is not just for North American news either, seems to be a world news issue.

I do find myself writing Grand Forks, North Dakota, and neglecting to add that it is in the USA, so when I do write about my polish acquiring travels I make sure to add USA,  for others not from North America.

Anyhoo- getting totally off topic and absolutely unnecessary commentary but somewhat relevant for a polish blog and questionable that I would even take the time to mention it.....  These next two blue polish's = I LOOOOOOOOOVE; But I have not worn them since.....

I wore these in wintertime and thus painted my nails indoors and it was pretty bad. They are soooooo pretty but I give these a 8 out of 10 ion the stinky polish scale. I doubt I will re-wear these but hope to find extremely similar shades of polish. Especially the Dark Blue one ~ 'M' #06 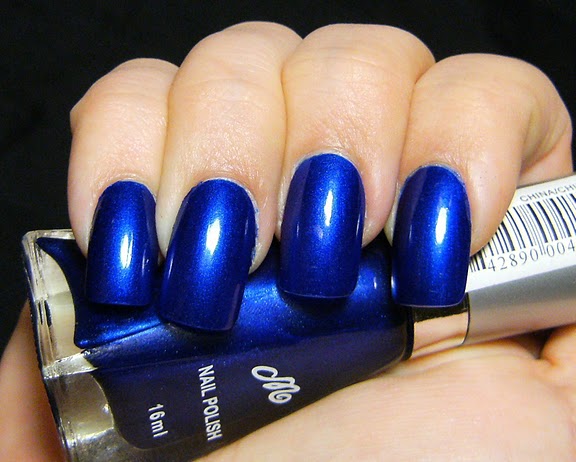 What a pretty bottle ( Below ). HERE is the post on the store in Toronto that I bought these at. 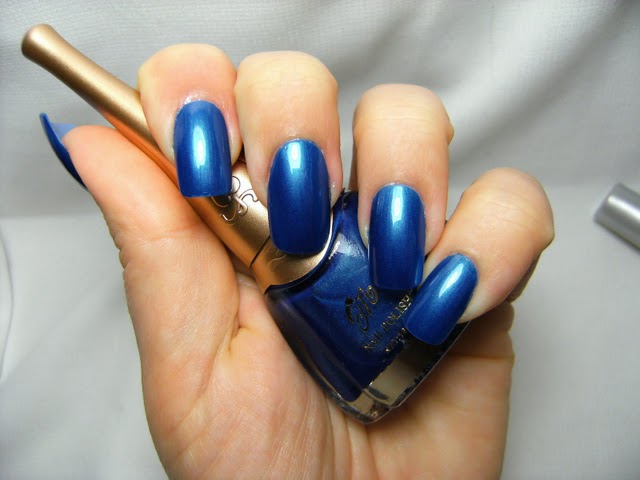 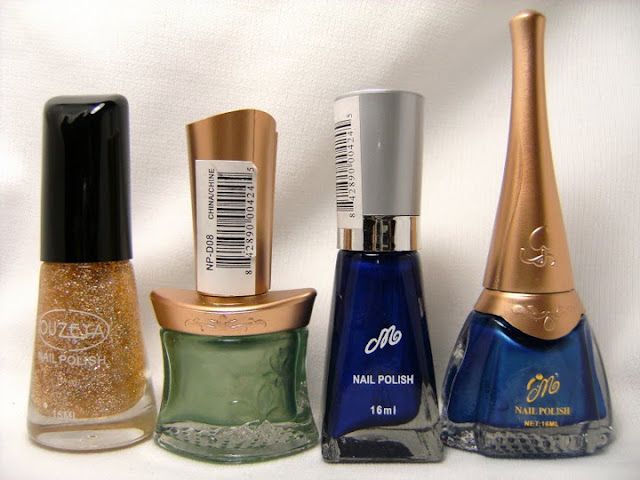 I have never worn the green-ish shade or the golden holo glitter.
♥

I picked these up at the Dollar Tree in Grand Forks North Dakota last summer. The colours were all fabulous.... even the last bottle in the left hand bottom corner package that looks like raw chicken still has some beauty to it. They are mini bottles an I hoped I could clean them out with acetone and use for frankens but having the bottle open for longer than 3 minutes was too much for me.

I love mini polish's and do not mind the small brush as long as it is thin and cylindrical ( are you listening WnW---- whats up with those craze bottles????? )  The brush was stiff, though and I found I got a lot of sparse areas on my nails.... I have modeled a few of these in this post 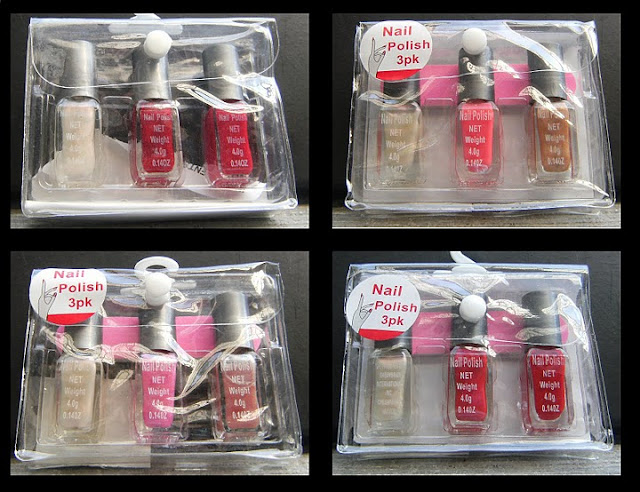 and check out one of the red polish's... it looks like coagulated blood NASTY... but ended up being an okay red polish; 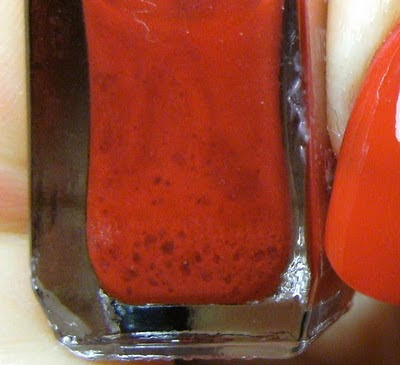 Viva 'Ghetto, Ghetto Fabulous', is bright golden/coppery colour, I made that name up as none of the 'Viva' brand of polish had no names. I wore this on one nail just to test it out  The black polish is just a  straight up dense shiny black . I have used quite a bit of it in layering on my super-duper home made nail swatches.... but never on my own nails.

On a scale of 1 to 10 I would put these at un-usable, just because of the lingering smell that lasted, and lasted, and lasted. I don't know why I still even have them...... I would not use these indoors again.... but it's fun to look at them I suppose. 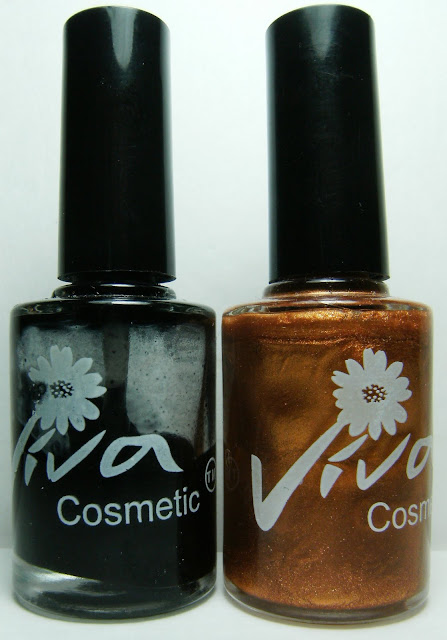 bhahaha- I've got a similar polish like the blue one from m #28
The store I got them was a chinese clothing store and I think they are from China or at from an asian country who still makes non b3f (and who knows what they dump into it) polish...

the smelliest... maybe the base coat from maybelline mirror image- it stinks but worth the "mirror like" effect

I actually (surprisingly) have only two bottles of polish I deemed unusable, namely the mini bottles of black of white stamping polish that were originally included in essence's first two stampy sets. Generally I'm good with chemical scents, but those two were so vile I was nauseous.

So far I haven't run into any that smell bad, but ones that smell strong like liquor I would have to say some Klean Color polishes...I had 4 of them and all of them I had to give away, the smell was way too much! :)

I have a polish by the same brand (in an identical bottle, at least) as your lighter blue is, and it smells just fine. Compared to my smellier ones (Asian no-brand goodies in splendid bottles) anyway :)

Ohh blingy blue! The most aweful polish was this golden bottle of Sally Hansen. Miracle..something. Don't remember the name but there is NOTHING worse than that, I dare you... :(

Maybe you can check my blog out as well and become a follower?
Http://tesjoesblog.blogspot.com

.
.
.
.
♥ AmusedPolish - Really I totally did not suspect the Maybelline Mirror image base to be stinky.... wow thats odd.

I Often wonder what exactly they put into these types of foul smelling polish.

♥ CuncmberPear - wow thats surprising too, i though essence was a top brand in Europe....

♥ Erica - I have read several times that KleanKolor is pretty funky - but they do have some fabulous shades and finishes of polish.

♥ Eva - I have seen these types of bottle from different brand too, and no one mentioned they smelled funny. It is a beautiful bottle, I hope I find the same ones you have becuase i think the bottle is beautiful and the polish is pretty.

♥ Iris - Sally Hansen, eh? I know I have tried several top coats that after they are used up half way, they actually start to smell worse, how is that even possible?

♥ Thanks I will check out your blog and follow!