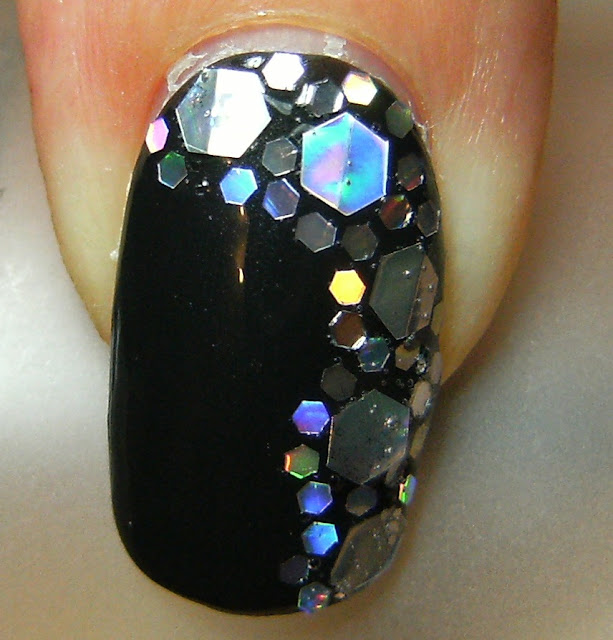 This took less time then you think. I started with a black base, then added the large and small holographic hex glitter setting them into clear polish with a tooth-pick. There is also some stray micro-glitter in the mix that was attached to the larger hex glitter.

I added the clear polish in small sections and tried to have all the pieces evenly spaced. I used 2 obscenely thick coats of Top Coat, I thought this would be dent-able for the whole day as it is very humid in my part of the continent - but it dried solid in much less time than I imagined.

I had to bend some of the bigger hex glitter pieces so they would sit on my nail properly. I just used my fingernail to 'bend' it in half slightly so it would mimic the curved shape of my nails....

I have tried 3 times to add 'new blogs' to my blog roll - I might have too many ( 730-ish ) and so maybe I am not allowed to have anymore on there? I will try again and possibly erase those blogs that have no new posts for 1 year or so.

I will probably wear this manicure for a few days, I love how this looks and will likely try something like this again in the future with different coloured glitters and nail things 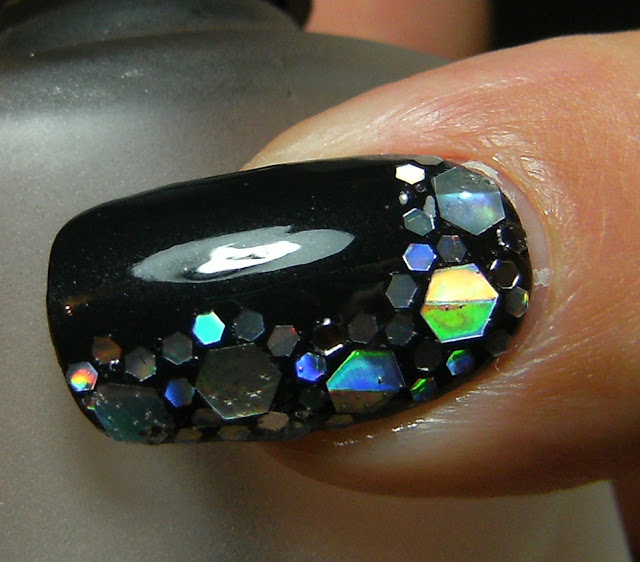 I initially wanted to have the black part of my nails matte, but I miss having shiny nails.....
This photo is BEFORE Top Coat - after applying clear polish I affixed the glitter to the nail 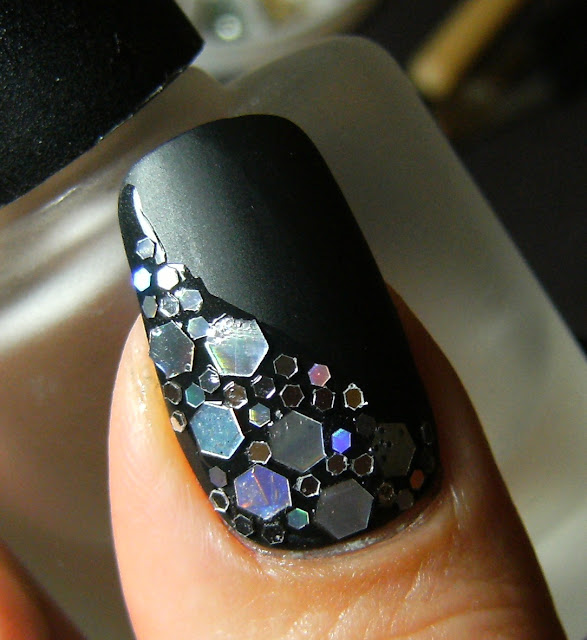 On my ring nail, I added the Matte Top Coat, just for this photo - I wore this mani shiny!!!! 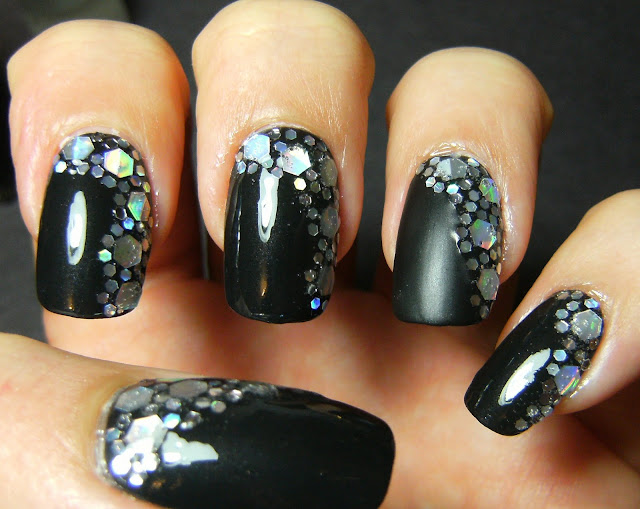 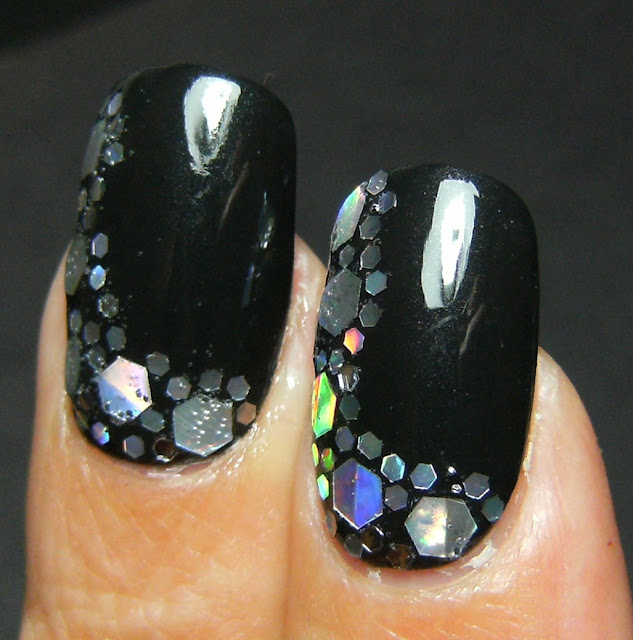 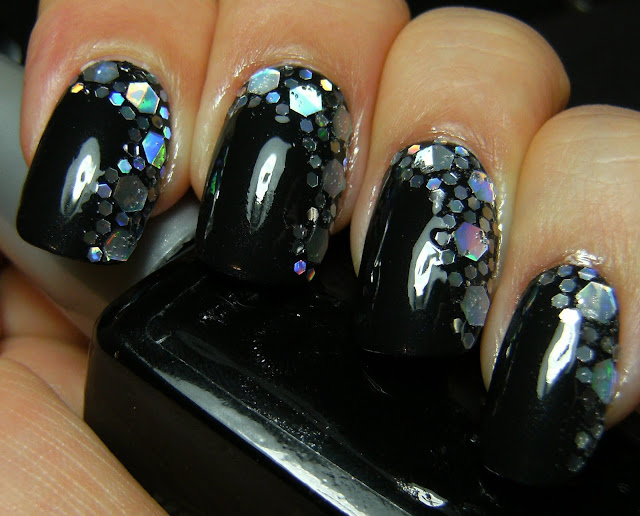 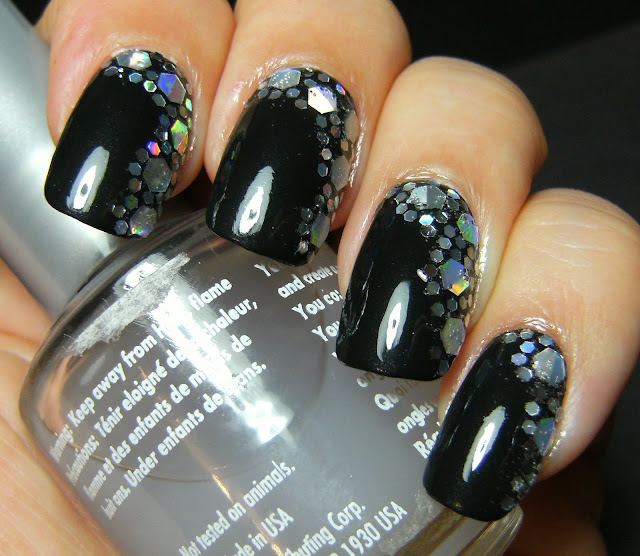 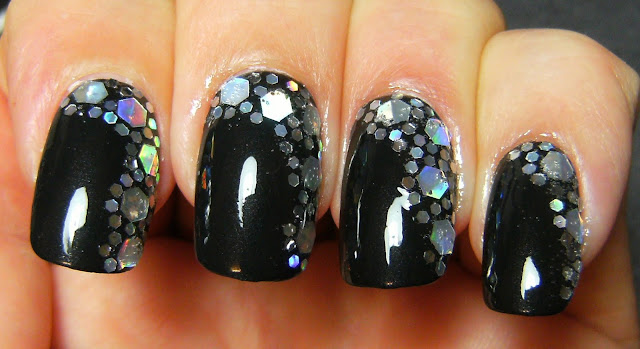 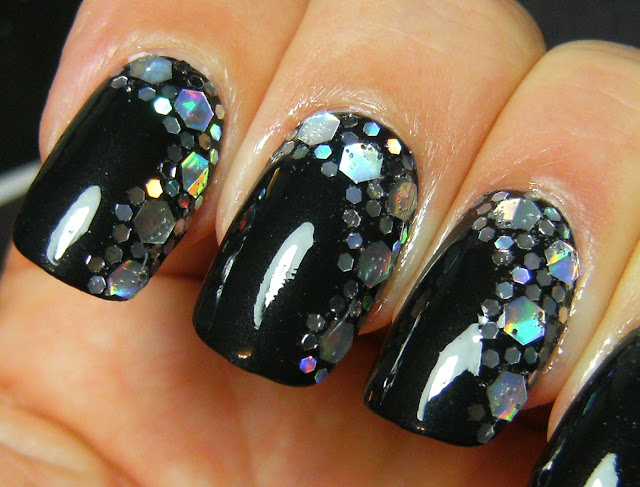 I love the black with the hex glitter. It looks very rocker chic :D

I love these! Gotta try me some black with pretty glitter! Did you have any problems with the edges of the glitter catching stuff? Do you know what I mean...when you can feel the teensy rough edges....

You always seem to put so much time into your glitter manicures- it always makes your blog posts fun to read, because i can't wait to see what you'll do with glitters next!

This is pretty amazeballs. I am sort of digging how the mani looks with the half matte/half shiny. :) Great job!

It's gorgeous! I love both with the matte part and all shiny:D Beautiful holograms!!

OMG this is amazing, I love it with the top coat! (:

I think this looks kind of neat matte but I absolutely LOVE it shiny. This is awesome!

It looks so pretty!!! Thanks for the inspiration!

black matte nail polish will forever be the best for me!!:) and those hex holo stickers are great!!

WOW. Stunning mani! I am absolutely in love with this! xx

Very interesting use of the large glitter and unique idea! Love it!

omg, this is just awesome :-D

WOW!! This mani is amazing :) I actually like the look of the matte more than glossy - very pretty!!

This is awesome! I love the hexagonal glitter a lot; it kind of gives off a disco ball effect that's pretty cool. Very nice!

Very impressive! I want that too! Doubt I have the patience or the skills though.

I'm now following, if you can check me out:
www.ladyjjs.blogspot.com
Thanks

Love this - it looks like you have tiny mirrors on your nails!

this is amazing i love it :D